Ready for a delicious blend of Baltic and Northern European cuisine? Lithuanian foods are full of fresh ingredients and rich in flavor. From expert agricultural techniques to Lithuanian noblemen bringing chefs from France to the country, there are plenty of different styles and flavors in Lithuanian food. Join us on a grand food tour of Lithuania with a native writer, as we explore 15 traditional foods of this beautiful country.

Dark bread has been the most important food in all Lithuanian households for centuries. In the past, people ate it for breakfast every day, and they also took it with them to eat during their work in the fields as a snack for added energy. These days Lithuanians still cannot imagine their daily life without a slice of dark bread.

There are many types of dark bread but the most traditional is considered rye bread. People eat rye bread with butter, various types of cheeses, smoked ham, or fresh seasonal vegetables. The traditional snack in Lithuania that pairs well with dark bread is salo –  cured slabs of pork fatback on the rye bread with fresh pieces of cucumber, spring onions, and a bit of black pepper on top. 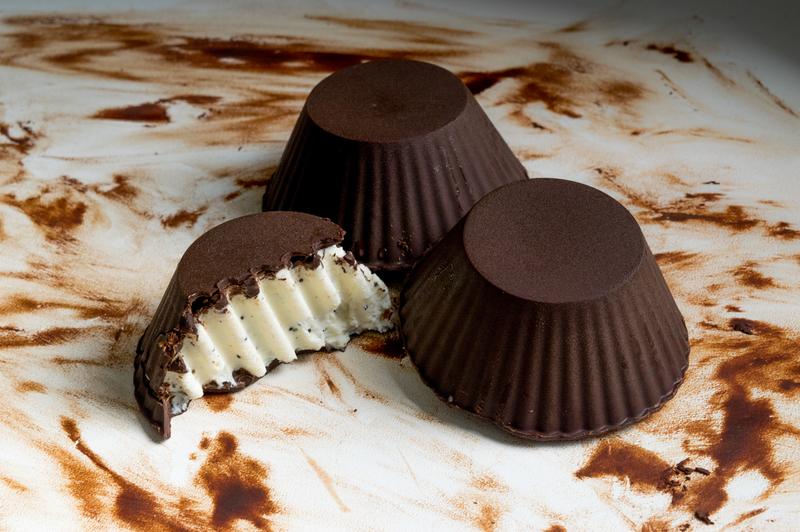 One of the most unique Lithuanian desserts is Curd snack, known as Varškės sūrelis. It is a rectangle shape dessert, made of soft cheese curd and covered in dark chocolate. The traditional one has a taste of vanilla, but there are many other types: cacao, poppy seeds, chocolate chips, condensate milk filling, or even pistachios. Sūrelis has been widely popular in the country for decades – people have been eating them as a snack between main meals as well as for breakfast or as a dessert with coffee or tea.

This product is so popular that it‘s also exported abroad. Therefore if you cannot go to Lithuania now, there is a unique opportunity to find it in a special Polish or Russian supermarket all over Europe.

Lithuanians have many different dishes in which potato is the main ingredient. One of the most popular of them is potato pancakes. Crunchy and full of taste – these pancakes are very easy to make at home or try at the local Lithuanian pub. The traditional recipe is very simple: potatoes, onion, eggs, and a bit of salt. Just do not forget a golden rule: eating them with sour cream is a must.

Restaurants and pubs have been looking at how to add something new to this dish by making it more interesting. Therefore, they now often serve it with pieces of salmon or mushroom sauce. For meat lovers, potato pancakes with minced meat filling is a great choice.

This soup is the best known Lithuanian soup and has a unique bright pink color. Šaltibarščiai has been the most popular cold soup in the country during the warm season for decades. When the outside temperature goes up, Lithuanians go to the local markets to buy the required ingredients or use the ones they have grown themselves.

The recipe is very easy to make and it is a very refreshing dish, especially on the hot summer days. The main ingredients of cold beetroot soup are kefir (fermented milk drink), chopped cucumber, boiled egg, and the most important – grated boiled beetroot. Since this is a seasonal dish, it is common to add a pinch of fresh spring onions and dill. Usually, it is served with boiled or baked potatoes. 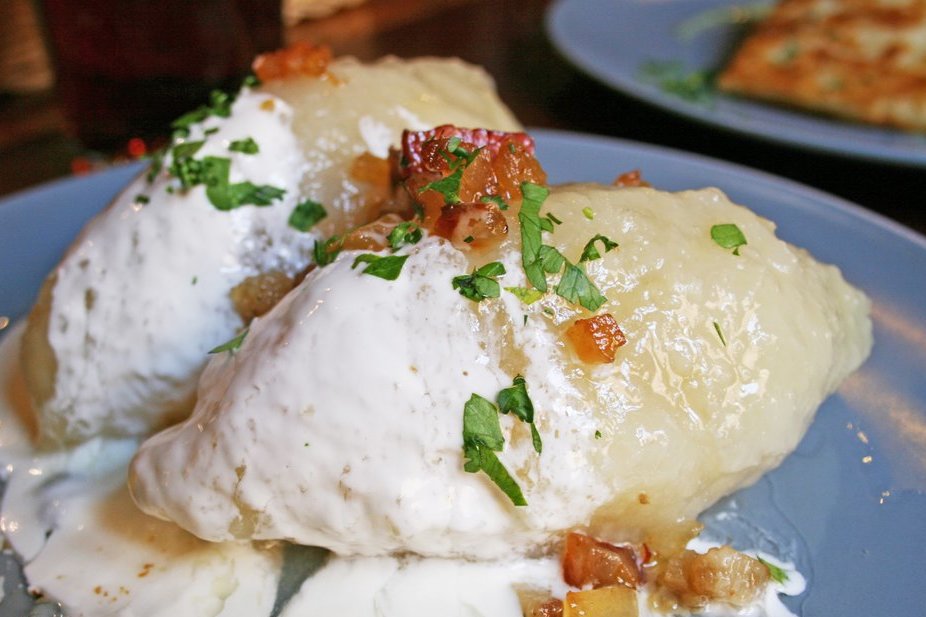 If Lithuania‘s cuisine is to be represented by only one dish, there is no doubt it would be cepelinai. Named after a Zeppelin airship, this dish is made of grated potato mass with a meat or cottage cheese filling. The most popular filling is minced pork or beef meat, but some places can offer dumplings with venison.

Other people like to eat it with cottage cheese inside. Even if they have never been as popular as the ones with meat, they are very interesting to try. These Lithuanian potato dumplings are served with various sauces: sour cream, butter, and onions, bacon bits, mushrooms, or curd cream. This is a pretty heavy meal, but worth trying at least once while visiting Lithuania.

When it comes to salads in Lithuania, white salad is by far the most popular. It is a mix of various vegetables: boiled unpeeled potatoes and carrots, marinated peas and pickles, boiled eggs, a pinch of salt and pepper, finally – everything mixed with mayonnaise. This salad gives you a feeling of fullness and it is worth trying.

It can be eaten as a starter with a slice of bread before the main course or as a side dish next to grilled chicken or other pieces of meat. White salad is a very common dish in Lithuania to eat daily or prepare it for special occasions, such as Christmas, a wedding, or a birthday. This is similar to the Olivier salad, commonly served in Russia, Ukraine, and other post-Soviet countries.

Since bread is so important to Lithuanians, it is very common to eat bread served as a snack. If you are visiting Lithuania, there is a huge possibility that you will be eating small pieces of baked bread at the bar because it is the most known snack there. Bread is sliced in small pieces, mostly sticks and covered by melted cheese or mayonnaise sauce. It is not necessarily a healthy and diet-friendly snack, but it is a great snack to munch on while hanging out with friends.

Usually, pieces of bread are rubbed in with fresh garlic and sprinkled with salt, which is a perfect match and creates an amazing taste. Baked bread is offered by bar staff when people are ordering beers, and it is a must-try food while watching basketball in Lithuania.

Potato is the most common vegetable in Lithuania, but locals do not only eat baked or boiled potatoes. Over the years, they have come up with many interesting ways to cook them and have brought them on way more creative levels. Švilpikai or baked whistlers is a great example of that. They are small potato dumplings baked in the oven. In the oven, they acquire a golden roasted look.

These dumplings are made from mashed boiled unpeeled potatoes, mixed with egg, flour, and a bit of salt. The whole dough is cut into many 3-4 cm rhomb-shaped pieces and baked in the oven. Usually, Švilpikai is served with a traditional sauce made from sour cream, onions, bacon pieces, or forest mushrooms.

The name of Šakotis in Lithuanian language means something with many branches and when you see it, you realize why it is called that. Because of its size, Šakotis can be considered the king of Lithuanian cakes and desserts. Usually, this cake is 30-100 centimeters tall. It has been a tradition for many years, to have it on the table for a special occasion such as a wedding, birthday, and others.

Šakotis can be soft or crunchy, and it is served with tea or coffee because its texture reminds you more of a cookie than a traditional cake. The recipe for this cake is very simple: eggs, sugar, flour, butter, and sour cream. Meanwhile, the appearance of Šakotis is yellow, but it can also be decorated with chocolate icing or colorful flowers made from sugar.

Even though the cake looks big, it is hollow because the technique of baking is to pour the dough on the special cylinder that is attached to a huge spit.

People can make better choices when it benefits others